Here are some movies from the video cameras in our experiments.

Movie of voids in dusty plasma

The two videotapes (glow and LLS) were recorded with common timecodes. We used this timecode to select still images for the paper so that the glow and the LLS pictures are shown at exactly the same time. The MPEG movies shown here, however, do not start at precisely the same video frame. They start at approximately the same time, with an accuracy of ~ 2 sec.

Movie of dust release (demonstration of a plasma-cleaning method)

Click here for movies and explanation orresponding to the paper :

Movie of 2D particle motion under shear (measurement of viscosity)

Movies from this paper:

In this experiment, a 2D suspension of microspheres was levitated. Without any manipulation, they self-organized in a traingular lattice. We then applied shear stress by applying two stripes of laser light. The laser light applies a 'radiation pressure force', pushing the microspheres. The two stripes are parallel, and aligned in the 'x direction.' In the movies, the upper laser beam pushes particles to the right, while the lower one pushes them to the left. This resembles Couette flow, except that there is no solid boundary involved.

Movie of wave motion in a 1D chain

Movies from this paper :

Apparatus setup, for confining a 1D chain by levitating charged particles in an electric sheath above a grooved electrode: 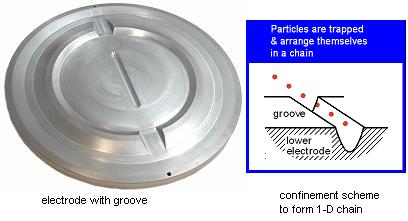